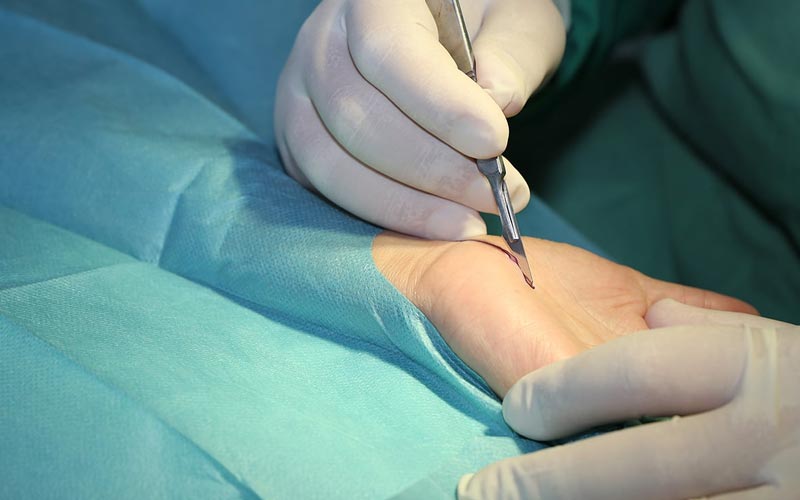 Carpal tunnel syndrome is caused by a pinched nerve in the wrist often the result of repetitive motions. Sufferers usually complain about numbness or tingling in the hand and arm as a result and without treatment the pain can get worse. A person may also lose grip strength as a result of muscles weakening. Carpal tunnel syndrome is more likely to affect those with conditions such as hypothyroidism, obesity, rheumatoid arthritis, diabetes and pregnancy.

Carpal tunnel release surgery is used to relieve pain and other issues associated with a pinched nerve in the wrist called the median nerve. This nerve runs the length of the arm and ends in the hand. It also goes through an area of the wrist called the “carpal tunnel,” which is where the syndrome gets its name. This nerve helps move the thumb and all fingers except the pinky. When the carpal tunnel is narrowed due to swelling, sufferers have localized pain and burning, tingling, itching or numbness in the palm of the hand or fingers. When the hand is relaxed, often while sleeping, the sufferer may notice their fingers become numb and fall asleep. In more severe cases, usually when carpal tunnel isn’t treated, pain and muscle cramps worsen and muscles in the hand shrink making it harder to grip things. When the median nerve loses function, nerve impulses become slower and coordination is lost in the affected area.
The surgery is used to relieve these symptoms and stop carpal tunnel from worsening. During surgery, the surgeon makes an incision in the palm of the hand to access the transverse carpal ligament. The surgeon then cuts this ligament, releasing pressure that has built up on the median nerve, which relives symptoms. After the ligament is cut, the hand is sewn back up and bandaged. There is no need to go back into the hand because scar tissue will fill the gap where the ligament was cut.
Full recovery from surgery takes about three months and during this time overuse of the hand should be avoided. Pain may relieve itself immediately following the surgery, while other patients say it takes several months to fully resolve. Those who have the surgery done on their dominant hand will notice recovery is more bothersome. One to two weeks after surgery you’ll have to go back to the doctor to have the stitches removed.

Carpal tunnel release surgery is done to relieve symptoms of carpal tunnel. It is most recommended for sufferers who have frequent or severe symptoms that have not resolved with rest and medication.

The benefits of carpal tunnel release surgery include relief from pain and numbness associated with stress on the median nerve. Most who undergo the surgery reclaim normal function of their hand, including less instances of numbness, tingling, itching and burning in the palm as well as a normal grip. In some cases it takes a little while for muscles to be built back up after surgery.

There are risks associated with every surgery, but carpal tunnel release surgery risks are low. The most common symptom reported is the return of carpal tunnel symptoms after surgery. In some cases, patients have reported painful scar tissue buildup after surgery. Less than 1 percent of surgeries result in nerve damage and other major complications. Recovery can take some time, often three months, as the hand rebuilds muscle. Because of the incision and cutting into the ligament, it’s normal to experience pain in the hand and wrist following the procedure. In most cases, carpal tunnel release surgery is done using a local anesthetic (a regional block) instead of general anesthesia, which reduces risks. However, as with any surgery, there is a small risk of infection.

Carpal tunnel release surgery relieves pain and numbness associated with carpal tunnel syndrome by cutting the transverse carpal ligament. Surgery is often reserved for persistent or severe cases of carpal tunnel syndrome where muscle loss and grip strength are affected. After surgery, all of these symptoms should be remedied, although it may take a few months for full function and strength to return.

Endoscopic carpal tunnel release surgery is the most common alternative to open surgery. In this version, the transverse carpal ligament is cut through a smaller incision in the hand and a small tube is inserted into the hand with a camera and cutting tool inside. Healing is often faster with endoscopic surgery and painful scar tissue buildup is less of a concern, however research has suggested that temporary nerve problems may be more rare.
Before either type of surgery is considered, doctors will try to resolve the symptoms of carpal tunnel non-surgically. The only times surgery is rushed is if carpal tunnel syndrome is causing nerve damage and/or there are tumors or other growths in the area that need to be removed. In all other cases, several weeks or months of non-surgical interventions will be tried first including rest and pain management. Lifestyle changes may also be recommended, such as taking more breaks if repetitive motions are the cause or completing strengthening and stretching exercises of the area more often. Some jobs or hobbies are more likely to cause carpal tunnel syndrome such as line work, hairstyling, baking and sewing or knitting.

Those who undergo carpal tunnel release surgery can expect to pay about $3,000 for the operation. Much of this money is related to facility charges and not the surgery itself so costs will differ depending on where the surgery is done and who performs it. In some cases, insurance will cover part of or the entire bill, so always check with your provider for an accurate estimate.